CGPL: With fishermen, every step of the way

My journey through the village of Tragadi Bunder in Gujarat has brought me closer to understanding the rural way of life. While having a leisurely evening stroll near the sea shore at Tragadi Bunder, I saw a group of fishermen returning home after spending a day at the sea. They’d had a great haul of fishing today, yet when I spoke to them about the variety of fish caught, they told me of the time it used to take to sort fish by species for the market.

I, like many others, used to think that catching fish is confined to casting a net and taking in the haul ashore. There is a longer, more tedious process involved – actually sorting the fish, by hand in order to ready for the markets. Coastal Gujarat Power Limited (CGPL), a wholly-owned subsidiary of Tata Power, realised this after beginning a series of projects to help the local fishermen community.

The CGPL team thought of teaching the locals about using technology to quicken the process of sorting their catch.

They devised, and presented the ‘Sorting Sieve’, and then rolled it out to groups of fishermen on trial basis. Using the Sorting Sieve has resulted in a significant decline in the amount of time spent in sorting catch.

Let us take an example of 41-year-old Ishak Abhla Chaba, a resident of Tuna Vandi who has been coming to Tragadi Bunder with his family of six for years for fishing. Earlier, members of his family were needed for the process of sorting. It would take close to 80 minutes for them to segregate the catch.

Sorting Sieves have been distributed in the area as part of project Sagarbandhu. It was initiated in Tragadi Bunder for the fishermen community in order to uplift them. CGPL has also collaborated with Swadeep for implementation of various activities under project Sagarbandhu. Paraphernalia such as fishing nets and hand-gloves have also been provided to the fishermen.

CGPL and Swadeep also work in tandem with CGPL’s developmental partner in the field of Education named Pratham to come out with educational initiatives at the school based in the Tragadi Bunder. Activities such as workshops, science fairs, sports and cultural activities are organised regularly for the children belonging to fishermen families.

Slowly and gradually, CGPL is steering the fishing community based in Tragadi Bunder in Kutchland towards empowerment by assisting them at each and every point. For the fishing community, it is a welcome change. For CGPL, it is just a small step forward in its attempt to change lives for the better. 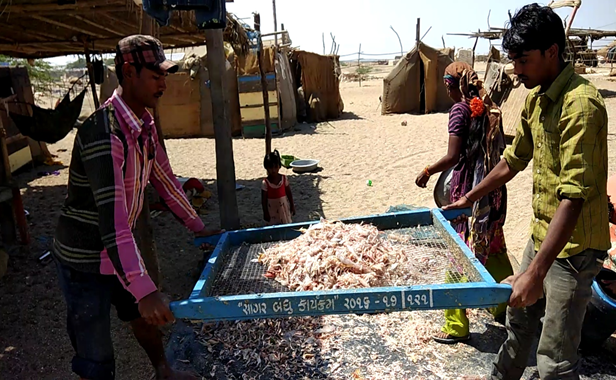 This entry was posted in Fisherman Initiative and tagged cgpl, Gujarat, Tragadi bunder. Bookmark the permalink.